A Day that Calls for Celebration 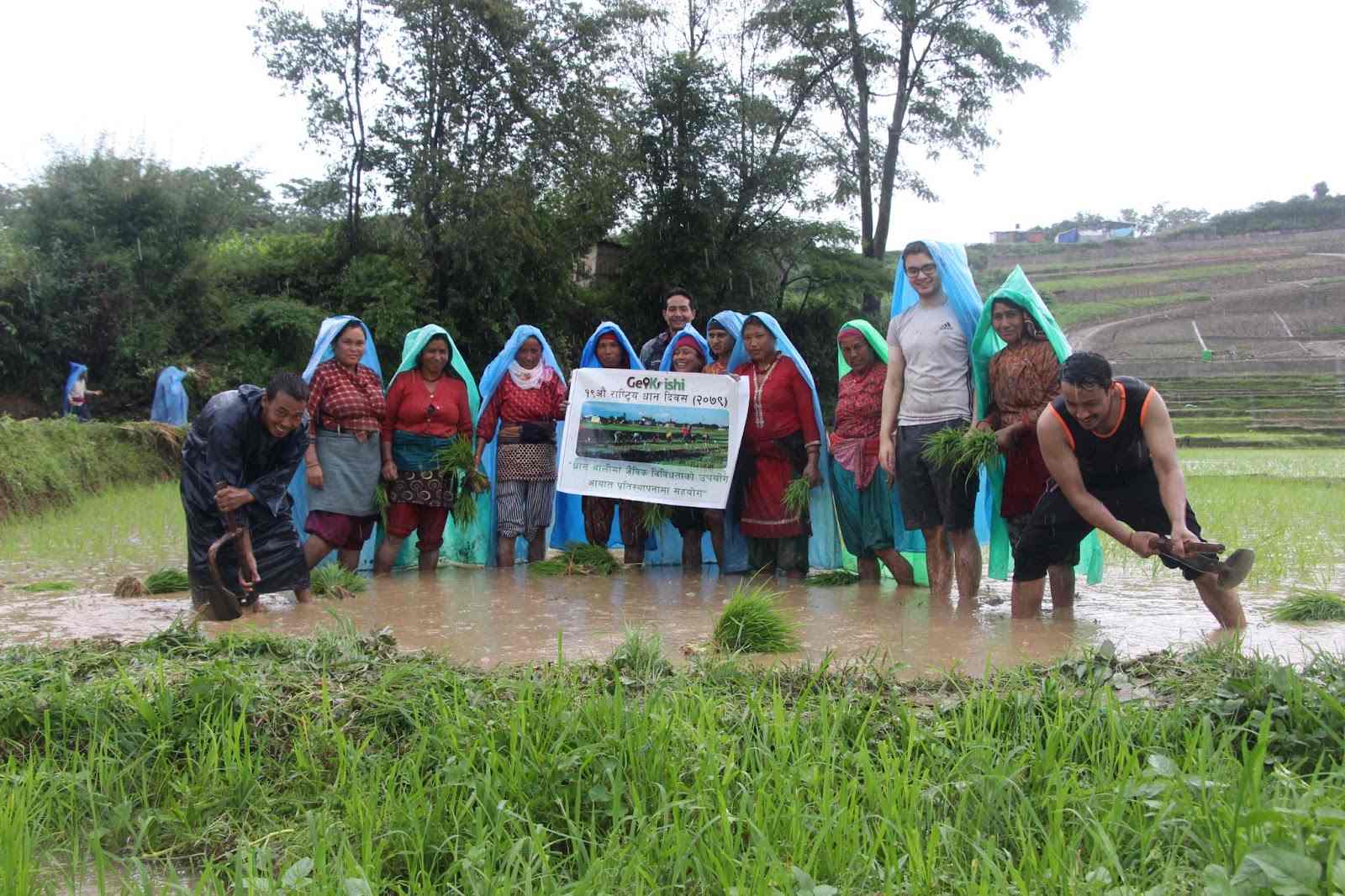 National Paddy Day or Rastriya Dhan Diwas occurs every year in Nepal, on the 15th day of the third month of the Nepali calendar. Dhan Diwas represents the beginning of the rice planting season, as the rains from the Monsoon season usually begin during this time of year. This day isn’t just a day to plant rice, it’s also a day of celebration where friends and family sing traditional Nepali songs and throw mud on each other while planting rice. Rice planting is a big deal in Nepal; 60.5% of the population works in the agricultural industry. Rice is extremely important to the economy of Nepal. This was the 19th year of Dhan Diwas, and I was fortunate enough to participate in it with my colleagues from GeoKrishi. The ride from Kathmandu to Chhampi, Lalitpur took my supervisor and me on bumpy and windy roads. Roads where getting crops to market will prove a challenge for farmers using them. The ride lasted around an hour, and near the end of our ride, required me to hop off and on the motorbike due to a steep hill laden with slippery mud from the monsoon rains. 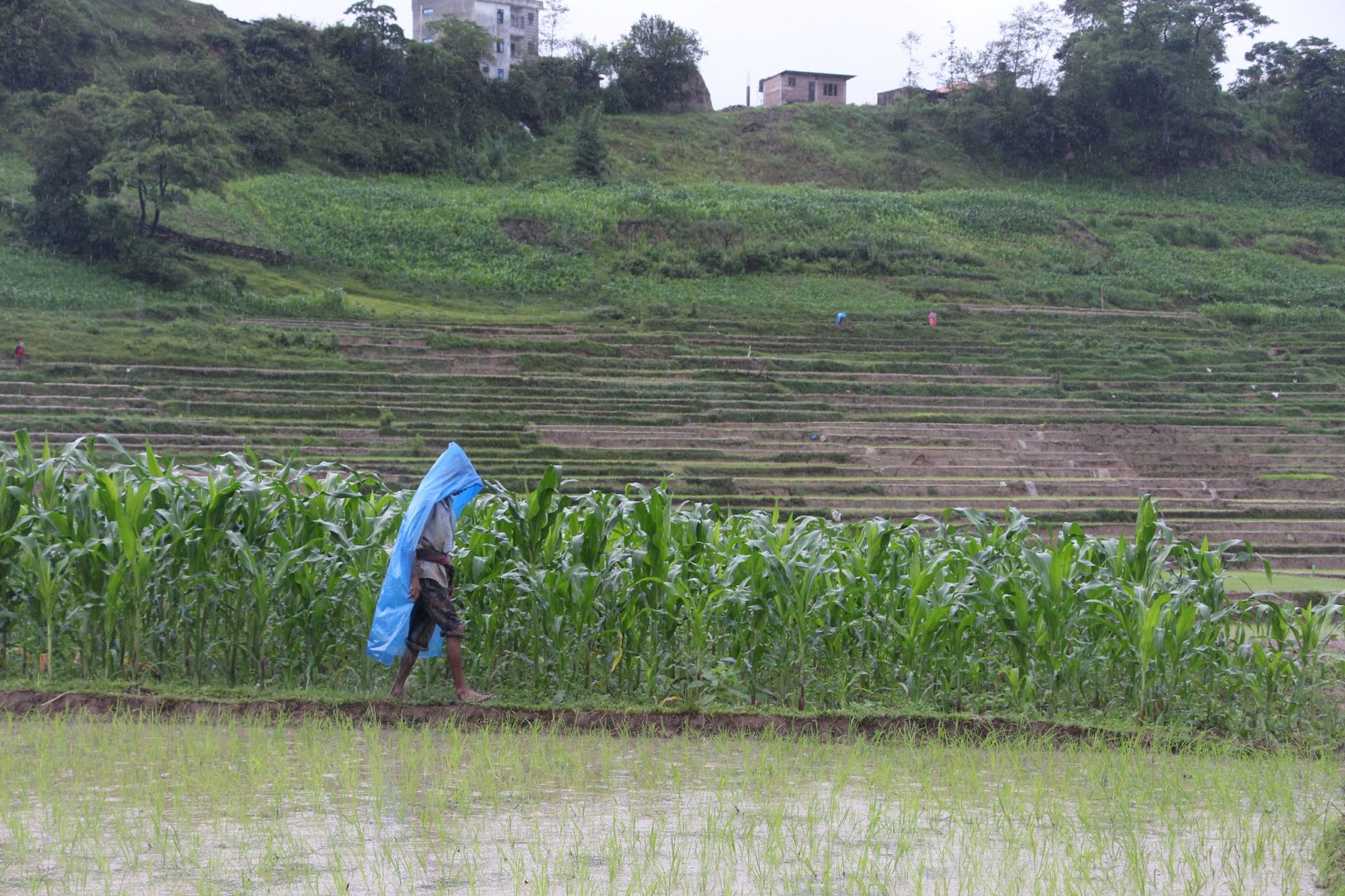 After finally reaching the farm, we took off our shoes and backpacks and carefully walked on the soft, muddy earth, hardly more than a foot wide. It served as a boundary between two fields. As we ventured farther into the fields, the mud became slippery and slimy, causing me to lose my balance more than once. Following our gradual descent, we reached the field that we were planting in. By this time, my hands and feet were caked in mud from slipping on the muddy sides of the rice field. I had initially thought that each rice field was filled with water and had a solid dirt floor, this, however, wasn’t the case. After plunging into the water, my feet felt the slippery embrace of the mushy mud underneath the water. After almost losing my balance once again, I carefully trudged through the murky rice field to the location of the farmers. Through a motion of hand waves and gestures, I was briefed on how to plant the rice. I quickly started, squatting and slowly finding a place to plant the seeds in the mud underneath the dark water. I held the seeds between my fingers and started to feel my way beneath the surface of the water, planting two to three seeds at a time. It took me some time to get my bearings, my footing always had to change every couple of times that I would plant, as unstable mud sometimes felt like quicksand, and my toes had to balance in the unstable mud which made the process difficult. Occasionally I would take a break for a few seconds, standing straight up and gently lifting my feet to regain feeling. Planting rice is no easy task, it’s much harder than it looks. The farmers went at a lightning-fast pace, deftly moving their hands in calculated movements. They planted without hesitation, their speedy precision was like nothing I had seen before. The rain started to fall shortly after we had started, and would continue throughout the day. It made everything colder, and just that more difficult for me to plant. The farmers, however, didn’t seem to mind the rain, they just put on raincoats and went back to work without so much as batting an eye. Rice planting is hard, and after a while, I began to feel it in my thighs and knees, but also my toes. Due to the uneven mud underneath the water, maintaining balance is a difficult task at times, and my weight more often than not shifted to my toes. After a long hour and a half, we had finished planting, I was relieved that we had finished. 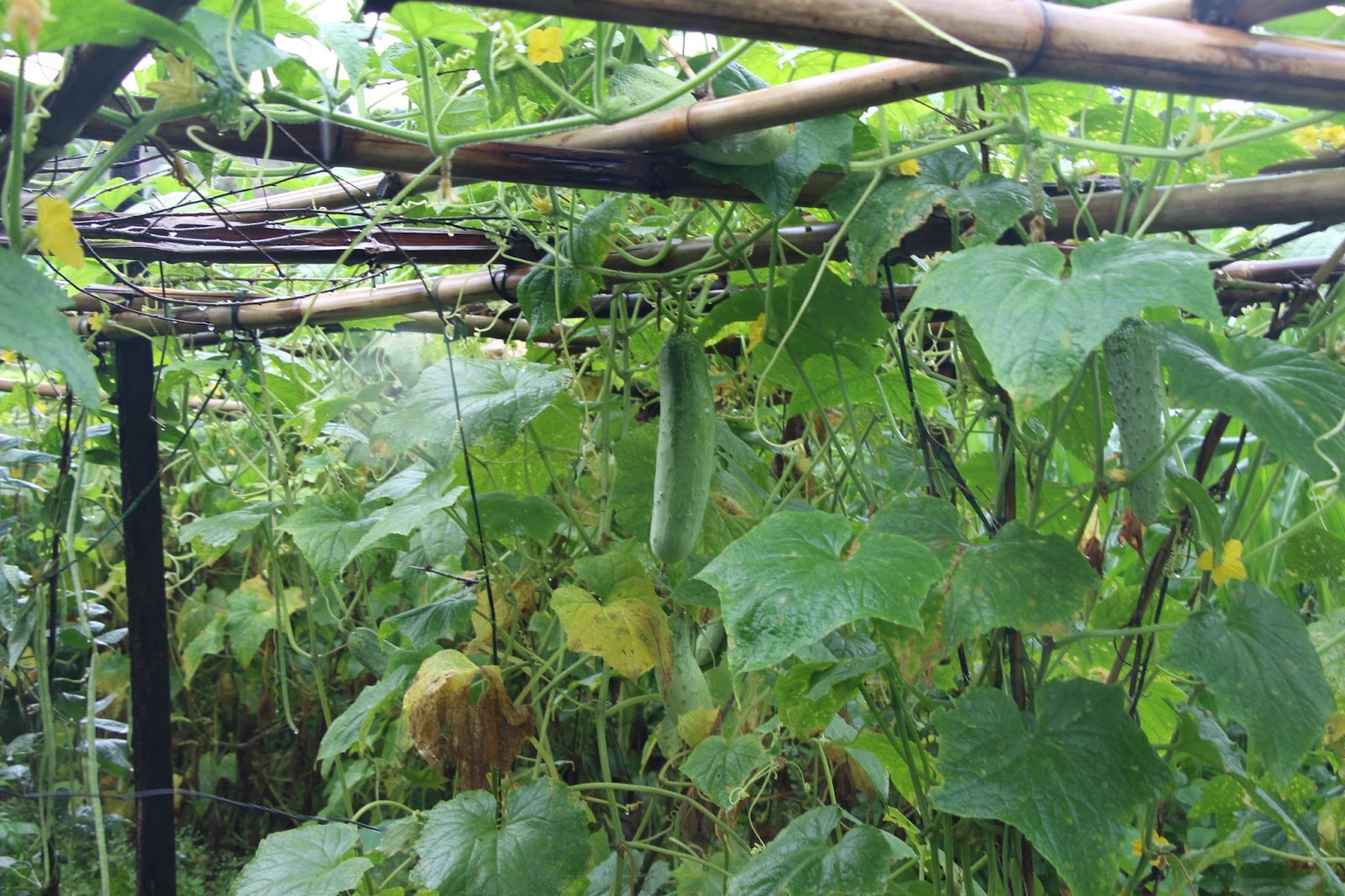 Afterward, we were invited inside a farmer's home to eat. Traditionally, after planting rice on National Paddy Day, laborers enjoy beaten rice, curd, potatoes, cucumber, and yogurt. Everything was fresh, with cucumber coming straight from a garden less than 50 feet away. As I sat on a Muda in the living room of a Nepali farmer's house eating, I mused on just how important rice and other cereal crops are to the economic future of Nepal. Farming employs 60.5% of the population, and the slightest disease on a crop can affect the field if it’s infectious. After eating, we prepared to leave. My supervisor noticed that one of the crops had started to lose its vibrant green color, and was turning to a sickly yellow hue. He explained to me that the crop had been infected, and needed to be treated in order to prevent it from spreading to the others. These types of infections become big problems if not confronted. On the ride home, I began to think about my time spent in the fields. Planting rice by hand is by no means a simple task, and has shown me just how much time and work goes into planting just one single grain of rice. The work can be even more difficult when the warm sun or the damp rainfall decides to grace the fields while farmers are working. It’s important to recognize just how essential rice is as the staple cereal crop of Nepal. Over the past 3 decades, Nepal has gone from a net exporter of rice to a net importer and relies heavily on India for its imports. I realized that the work that GeoKrishi does is essential in supporting, and helping these farmers make a profit. It wasn’t until I was in the fields did I truly understand the importance of bridging the gap between what technology can do, and the specific context that farmers need in order to move into the new era of smart farming.